"The Lord of the Rings" Movie

For many years the greatest trilogy "The Lord of the Rings" has been available only in a print version. The first attempt to make a screen version was made in 1958 by a certain Zimmerman, who wrote a film script for "The Lord of the Rings". J.R.R. Tolkien looked through it and in his letter to Forrest Ackerman heavily criticized this feeble attempt. It turned out that the script didn't reflect many of Tolkien's thoughts and some of the characters lost their appeal. It was hard to film the book as a lot of peculiarities had to be taken into account. 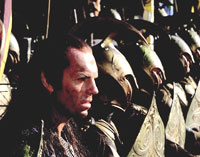 After some 40 years, when shooting techniques had considerably improved, it became possible to make fantasy look like reality. But without a very good producer (Peter Jackson), excellent script writers (Peter Jackson and Steven Sinkler) and a distinguished cast the film wouldn't have had its roaring success . It is enough to look at the cast list at the end of the film to understand what one needs to bring a legend to life.

The filming began on October 11, 1999 and is produced by New Line Cinema. Total budget of the film makes up approximately €200-300 milj. Many special effects, re-creation of the characters of Middle-earth, required great expenses.

The first part of the trilogy turned out to be a tremendous spectacle. Beautiful landscapes of New Zealand as well as fine music by Howard Shore help to plunge us into the atmosphere of "The Lord of the Rings".

In all the three parts of the film it is planned to have approximately 1200 episodes using computer graphics. They include a fierce battle of the Last Alliance with Sauron, computer-generated constructions (such as Isengard and Moria, the Kingdom of the dwarves), and some creatures (like Gollum or an eagle who saves Gandalf's life). Gollum, to some extent, has become a unique character. He is the result of combining a computer animation with capture movement technology. The latter is achieved with the help of a robot, which transmits the movements of an actor, standing off screen. Gollum turned out to be surprisingly realistic and it seems that a real actor plays him. Peter Jackson and His Weta ltd is responsible for all the special effects.

Of course, the film somewhat differs from the book. Peter Jackson said that he was making an interpretation of "The Lord of the Rings" and wasn't going to follow the book strictly. The first part of the film has had a huge success, and may this success attend the two other parts of the film!